I’ve been here from the beginning 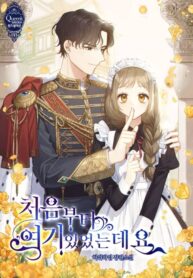 N/A, it has 4 monthly views

Read manhwa I’ve been here from the beginning / Aku Sudah Disini Dari Awal / 처음부터 여기 있었는데요 20 chapters will be updated at harimanga. Thank you for always supporting us. Art manhwa: Summary I’ve been here from the beginning: Don’t do that too much. Poor maid The day after I commented on the pity of the extra maid, who even the author had forgotten. He has possessed that poor maid, Maria Mayer. Due to the convergence of its presence to 0, it even acquired the title of ghost. Still, I thought that I could do my job with sincerity, but people who were interested in her began to appear. Even the future princes and grand dukes! “Can’t you feel the presence? What the hell is your identity?” With the Crown Prince Elias who was half interested and half wary about Maria’s identity, he wanted to keep him by my side. “It doesn’t matter that I don’t remember. In the future, you can make sure you don’t forget me.” Archduke Dietrich approached with a smile as if he knew it even though it was the first time he had seen it. me, i… … I’m just an ordinary maid 1 (Special: Ghost)! * “Where are you looking?” A black shadow slowly appeared behind the man’s back. “It’s just my afterimage.” nice. it was famous

The Time of the Terminally Ill Extra

The Reason Why Raeliana Ended up at the Duke’s Mansion

The Villain’s Daughter-in-Law has limited time

The Scorned Villainess Survives in the Wilderness