Even the villain is annoying 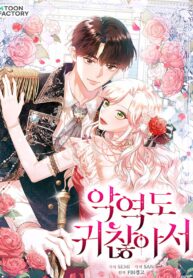 Even the villain is annoying Average 5 / 5 out of 1

Read manhwa Even the villain is annoying / 악역도 귀찮아서 Why It Should Get Picked Up: Its Manhwa is scheduled to be launched in the second quarter of 2022. Description (mtl-ed): Versace family! A place that produced many swordsmen and possessed a powerful force. Such a family perished. Due to the poisoning of the Crown Princess in the involvement of a foolish woman named Olivia de Versace. She was a woman who was pointed out as a rare ugly or evil woman because of her tall and heavy body. *** I was absurd when I was possessed by a novel that is often referred to as a novel. If you’re going to pretend to be a female lead, or something. or the male protagonist. Anyway, shouldn’t it be a small supporting role? Even if it wasn’t, I shouldn’t have given the passer-by’s appearance like this.

Is It A Fortune Or Is It A Woe?

The Beauty Ran Away With The Hedgehog

To Melt Your Frozen Heart